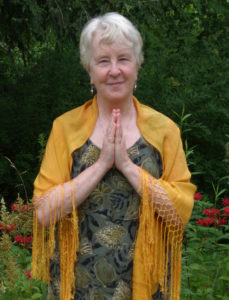 Aimée was initiated by Pir Vilayat in 1985 and has lived at the Abode since 1988. She is an ordained Cheraga and a conductor in the Healing Order. She retired a few years ago from 25 years as a teacher and director of Mountain Road School in New Lebanon, New York. Her work with Tara stems from her connection with Tara Dhatu, a worldwide non-profit sacred arts organization formed to protect the integrity of the Mandala Dance of the 21 Praises of Tara. This spiritual dance practice is based on ancient prayer and developed by Prema Dasara,spiritual and creative director of Tara Dhatu. The dance is a full spiritual practiced and has been described by H.H. the Dalai Lama as “A true vehicle to enlightenment.” (More information about Tara Dhatu can be found at http://www.taradhatu.net.)

Aimée was introduced to this Tara practice when Prema brought it to the Abode in 2001 and has been a devoted practioner since then, dancing Tara in California, Hawaii, Brazil, Bali and Java as well as in Woodstock, NY, and at the Abode. In 2014 she became a Level 1 student teacher in Tara Dhatu’s education program which allows her to share some of these practices with others. Aimée reflects, “Sharing these practices and the deep peace and ecstasy they engender is one of the great joys of my life.”