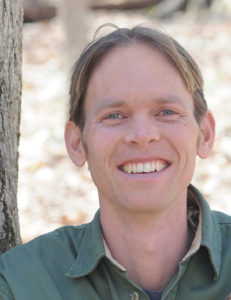 Devin has loved exploring in and learning about nature since early childhood. He discovered his thirst for the Wilderness Teachings in 1994 and has been walking the wilderness path ever since. In his first four years, Devin studied Survival, Tracking, and Awareness skills with Dan Fisher of Wilderness School in Maine and Tom Brown Jr. at the Tracker School in New Jersey.

Devin has trained for six years in Naturalist Mentoring and Community-Building skills through Jon Young and the Wilderness Awareness School, as well as Mark Morey and the Vermont Wilderness School. Devin received a degree in Environmental Education from Prescott College in Arizona in 2001. He joined Flying Deer Nature Center in 1998, where he was mentored by Leonard Brown in the ways of Coyote Teaching and the Medicine Wheel.

Devin deeply loves working with children and nature through creating the Naturalist Community that has been his home since 1998. Devin and Michelle have been running and directing Flying Deer Nature Center since 2001 under the guidance and encouragement of Leonard and Deborah Brown, the center’s founders and elders.