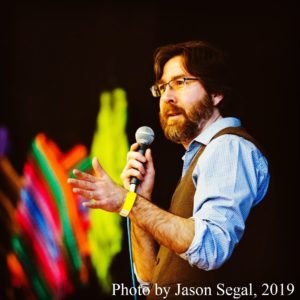 Pir Netanel (Mu’in ad-Din) Miles-Yépez is the head of the Inayati-Maimuni lineage of Universalist Sufism and a scholar of comparative religion. He is the translator of My Love Stands Behind a Wall: A Translation of the Song of Songs and Other Poems (2015), and the editor of Meditations for InterSpiritual Practice (2011).

Born into a Mexican-American family, in his late teens, Miles-Yépez discovered his family’s hidden Jewish roots and began to explore Judaism and other religions seriously. After studying history of religions and comparative religion at Michigan State University, he moved to Boulder, Colorado, to study with the innovative Hasidic master and leader in ecumenical dialogue, Rabbi Zalman Schachter-Shalomi, founder of the Jewish Renewal movement. In addition to Schachter-Shalomi, he also studied with various Sufi masters and teachers of Buddhism, and counts Father Thomas Keating, Trappist monk and founder of the Centering Prayer movement, as an important teacher. In 2004, he and Schachter-Shalomi co-founded the Sufi-Hasidic, Inayati-Maimuni Order, fusing the Sufi and Hasidic principles of spirituality and practice espoused by Rabbi Avraham Maimuni in 13th-century Egypt with the teachings of the Ba’al Shem Tov and Hazrat Inayat Khan.

Currently, Pir Netanel teaches in the Department of Religious Studies at Naropa University in Boulder, Colorado.