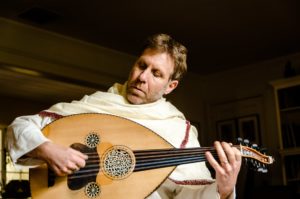 Yuval Ron is an internationally renowned World Music artist, composer, educator, peace activist and record producer. Graduating Cum Laude as a Film Scoring Major at Berklee College of Music in Boston, he has continuously researched various ethnic musical traditions and spiritual paths worldwide. Among his many honors, he composed the songs and score for the Oscar winning film West Bank Story in 2007, was the featured artist in the Gala Concert for the Dalai Lama’s initiative Seeds of Compassion in the Seattle Opera Hall in 2008, and has collaborated with the Sufi leader Pir Zia Inayat Khan since 2006. His awards include the Los Angeles Treasures Award in 2004 and prestigious grants from the National Endowment for the Arts, American Composers Forum, California Council for the Humanities and the Rockefeller Foundation.

Under his leadership, the internationally renowned music and dance group, The Yuval Ron Ensemble, has been actively involved in creating musical bridges between people of the Jewish, Muslim and Christian faiths and has been featured on CNN, National Geographic, and in the international press and media. Yuval Ron has produced field recordings in the Sinai Desert with the Bedouins, archival preservation recordings of the sacred Yemenite, Moroccan and Andalusian Jewish traditions, and the album of master musician Omar Faruk Tekbilek titled, One Truth – A Window into the Divine Passion and Poetry of Sufism.

Yuval Ron has also collaborated with neuroscientists Mark Waldman, Andrew Newburg and others to explore the connection between sound and the brain and has received commissions from Metta Mindfulness Music to create music for medical and healing use in clinics and treatments centers.

Yuval is a noted lecturer and has been invited to speak at numerous schools including: Yale, John Hopkins University, UCLA, Middlebury College, Brandeis University, MIT, Berklee College of Music, University of Chicago, Pittsburgh University, Texas University in Austin, UCSD, Jerusalem Sam Spiegel Film School and many others. Yuval Ron has been on the faculty of Esalen Institute since 2009, is an affiliated artist with the Center for Jewish Culture and Creativity, and a “Guiding Voice” for Seven Pillars – House of Wisdom.